Where stories are born 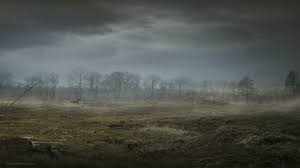 There's a strange place in the human soul where not many people tarry. It's the no man's land between experience itself and language. It's the starting block before the pistol fires, that moment before you say "I do", the instant when you admit to something really big, those few times when you use the word "love" for real, the utter smudge of time after some-one close dies or goes away, or the sense of falling far away from who and what you are because all possibility of control has gone.

It's neither a good nor bad place. It's a place that's pre-verbal, pre-rational, pre-lingual. If Broca's area, Wernicke's region and the angular gyrus are the language axis of the brain, perhaps the skin is the entry point to where stories are born, because it's literally the edge of ourselves.

At various stages of development from neonate to adolescent through adulthood, subconscious emotional filters create platforms quite independent of human choice and preference. These platforms are where we stand, metaphorically, and when they collapse, we do, too.

But the moment I write about platforms, I have made up a story. We enter the conscious world on the back of a story. One's own narative has begun, regardless of who's telling it, what inspired it, how the chapters will be divided, how it feels as it goes along, what drama and desire prompt necessity and purpose, and what sense of ending prevails.

Let's take away the platforms, strip away the "cool web of language", remove rational thought, eternally distance ourselves from reasonability and totally obscure belief. What we have left are the neurons, the synapses, and the messages that race, meet, connect, reconnect and resume racing.

What's it all saying? Well, he who has ears to hear, let him hear.

I used to tell my Irish friend about the dreams I had at night. He always looked at me with goggle-eyes and his mouth slightly open, and his response was always the same: "Shit!"

When I asked him why he was so rude, it turned out he was jealous. "I wish I had dreams like that," he said. "Tell me how!"

I have learnt to beware of anyone who fervently and finally believes anything, from scientists to salesmen to socialites. Interestingly enough, scientists can be the most closed-minded of all. My life is no doubt based on a true story, but I wonder if anyone will ever tell it, or indeed, if it can be told. Like rain after falling, words evaporate. Their energy remains, but dissipates unless someone with ears hears and recognizes. The power of story is that it connects. If I am convinced of anything, it glues my sense of self more strongly.

Then again, something severe happens, and it all falls. Painfully, sometimes never, we reconstruct and re-tell ourselves, moving through no man's land. If it seems I tell a sad story about no man's land, it's not my intention. No man's land is to be claimed. Humankind has blasted sensible meaning as well as meaningful sense out of the water, and has greatly contributed to establishing no man's land. The no man's land where stories are born is however, a fecund place.

Out of failure, new beginnings are imminent. From separation and divorce, it's possible to divine a newness of love. From loneliness, great giftedness is recognized. Careers change, not always for the worse, and if we are to contemplate the seasons well, life and death are not discontinuous. Something is always afoot.

To move out of no man's land at least just start a new story. To make a claim, you have to stake it. Read Amy Cuddy who re-ran her own story to arrive at her admirable work. Write your own journal and see what happens. One paragraph a day. One word of change at a time.

The place where stories are born is the heart of imagination, and that's not an unreal place. To the contrary, if anything is to be taken very seriously, it's imagination, because image, mood and story feed each other, and communicate that heart directly.

We experience that heart, our own heart, each other's heart on an hourly basis. Certainly, we are interrupted, usually overwhelmed by formal narratives, accidental anecdotes, unwanted messages and a thousand acts that are unnecessary to our own drama.

As a service, The Story Clinic offers short jouneys to the heart of no man's land and back again. It's a safe trip. Anyone coming?