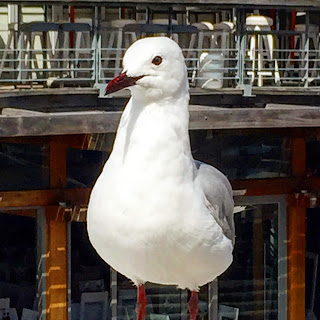 Humans tend to believe that language is communicative, whereas words actually obscure more than they reveal. I read the other day that language arose as a result of the need to hide feelings, and this made some sense to me. Language is a later development, a highly manipulative system of signals to both conscious and unconscious aspects of awareness in connection with self and sociality.

With and without sound, animals communicate with greater immediacy and intuition. Studies that show how dogs know when their owners decide to return home, how shrimp know when another one dies, how plants read intention may be found for all to read and know, and the implications of these are huge.

How humans communicate beyond words is what interests me.

The bafflement with which we are born and the instinctive fear of death is an instrument of power for those who seize it.

I should emphasise that a few times.

Our natural ability to communicate with ourselves has been hijacked since it could ever be hijacked: the thing to be said about power is that power is taken.

I have a particular issue with Christian narratives and its leaders: those who would pretend to know God better than others: back off, back down, and learn love.

That said, the cosmic connection is overwhelming, once grasped.

Have you ever grasped that your feelings are God-based? However humans have come into being, the sense of aloneness, aliveness, alertness, joy, jadedness, melancholy, mediocrity, even madness and the spectrum of what humans can feel is based on the lightning speed of your body's neural system responding to an ecology that's emotional as well as everything else.

Ecology is not only green, it's the entire spectrum. Butterfly wings creating hurricanes is in ratio to a thought putting out VX2A21, which is a star some million light years away.

For humans, the big issue is do I get to be aware after I die? And is it a good awareness or am I gonna burn?

I could give a trite answer to this, but I'm going to go the long way round.

Learn to communicate in a cosmically connected way.

Do you see the trees, plants and patterns on your garden? If you have one? Do you notice how stars navigate the wide sky? I should also ask have you ever seen the colours of the wind, but Pocohantas would laugh at me.

That's who you are once the normalising narratives are stripped away.

It goes the entire way: this little bit of communication we think we have now, it's a highway to everything that has ever and will ever exist. The table of elements is a trustworthy witness. How does it feel to communicate cosmically?

For me, it takes two to three seconds to switch to that awareness. The it takes a sense of acceptance and peace because the ensuing chaos is total.

And then the stories pour, and poetry gets so impatient with language, that so slow expression of human spirit.

To be in contact with not only everything that's in this beautiful natural world, and sad, sad, human world, but also reaching to visions of impossibly distant yet real galaxies, and nano-atomic infra-galaxies of intrinsic imperatives of which our neurons are made: how would this feel?

It feels that same way you know, in your conscience, your helpless desires, your needs, your reachings, your self-imposed wretchedness, your self-chaos, your attempts to garden to wildness that which you've been given, to husband the house of your unthinking choosing.

We tend to go with the obvious ones like irritation, anger, passivity, patience, purposefulness, and there are so many, but they actually come in layers. They are currents upon currents, and honesty is a very vague grasp of what's really going on when it comes to emotional intelligence.

The cosmic connection is there. From feelings of abject fear to courage in the core. We should wonder less about a God and consider more about an infinite connection that has nothing to do with language.

Intuitively, humans are more than capable. That's how to let the dogs out....


Posted by Prof Walter Harry Willies at 11:35 No comments: