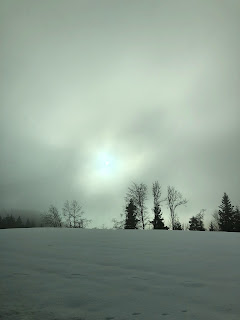 Jung posited individuation, individual consciousness, the individual unconscious and the collective unconscious. Without doing much careful explanation, I'd like to suggest the addition of the cosmic unconscious. Here's a rough idea of what I'm saying:

There's no end to approaches to human consciousness and mindfulness, so I'll skip past that and go to the individual unconscious. To simplify this as far as I'm able, I'd say that doing your own shadow-work is unavoidable. What I was taught within the context of fundamental Christian evangelicalism is, from my perspective, spiritual bypassing, which is not a term anyone would have known about in those days. No-one is going to save you from your own storms, hidden or evident, past, present or future, and that's a useful truth to accept. You have to face your fears, sort your family constellations, get acquainted with all your selves and do the research your experience asks for and treat your brain with at least as much disinterested intelligence as it treats you. Doing the shadow-work is hard going, but you're not going anywhere without it. And if you meet someone along the way who refuses to be challenged, chances are they haven't done their shadow-work, and that's why they don't like the feeling of humility which is closely related to the feeling of kindness. So the shortcut to approaching the individual unconscious is doing the homework of shadow-work.

Quickly to the cosmic unconsciousness and the approach I'd suggest here: get out of time.

Here's the thinking: since time is a human construct, let's consider what happens when you take it away. Time implies irreversibility, like being born, having life-changing experiences and dying. Time and irrevocable change influence each other, as emotions declare, and expressing such profound emotions has produced endless philosophy, good music, drunk singing, and wordlessly gazing beyond the horizon. By definition, strange things happen when time disappears, or at least, becomes less relevant. The corollary of what I'm saying is that the more conscious one is of time, the more conscious one is. In Switzerland trains are time. That's a lot of infrastructure. Sometimes I wonder if tourists of the paranormal want more consciousness or more unconsciousness. The intrigue with with life after death, psychokinesis, channeling and clearing chakras doesn't really know what it wants except more. Perhaps dissatisfied consciousness needs to go the other way and become more mineral, more rock-like. More inanimate. Or if that's not so appealing, then perhaps try to be as unconscious as a waterfall. There are many options suggested by the Romantic poets. To tease out the idea of the cosmic unconsciousness, I'd point out that organic chemistry can't escape the basis of inorganic chemistry: the table of elements is about as neutral as Switzerland could ever be, and has no interest in being either the fire of a distant star or your beloved cat. The language of quantum physics is baffling: all that there is exists and does not exist at the same time, it's just a Mexican wave of unreality that passes the here and now infrequently. If I and my pet rock are one, in the sense of belonging to the same table of elements, which is the only given I can think of, then once and for all, let's allow that carbon, hydrogen, oxygen, potassium, sodium and traces of more elements than these work together to allow their voices to upgrade - maybe downgrade? - to human voice. Language is a mere code which has unfortunately tended more towards real folly than artificial intelligence, but nonetheless does have the ability to reach for felt aspirations. What we feel is about as real as we can get, but these feelings are so quick, that more often than not the heart is more truthful than the brain. How quick is that?

Well, it's not in time. As I write, breathe, think, feel and fumble my way, oxygen and hydrogen are doing what they do, and are part and parcel of the consciousness I pretend at. The KNa pump, that rather ridiculous way of describing the amazing dynamics of neurons, sits at the very ability of whatever my ego believes it's directing. In this sense, the living body can be said to be out of time. And if we take the mathematical subway out of quantum physics, who knows what language would point us to which platform? And if death is a point of departure, perhaps so is life?

It's been said that we've reached the stage where science and spirituality should be holding hands. My opinion is that they always have done so, all 118 of them, sub-microscopic miracles we don't notice and take for granted while they stand and knock on the door of our inner skin of sensitivities requiring to be worded in ways we have yet to discover.

Posted by Prof Walter Harry Willies at 07:03 No comments: