South Africa in search of its story. 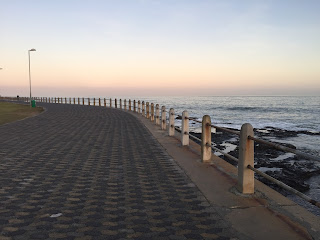 Which initiates which, the narrator or the narrative? Is one ever anything but a response to a huge array of triggers? The chaos of communication that South Africa has become warrants both deep listening and decisive action. Here are some ways of clarifying the way to re-creating the story of South Africa:

Communicate rather than enact anger

When mass emotion surges, beware politicians, preachers and any other slogan-bearing entities

Action as well as communicate compassion

Social media has little to do with actual experience

Attention is easily duped by almost anything

The road to a new story for South Africa is blocked by two obstacles: a manipulation of cash and a crisis in meaning. The first means that we can't seem to stop them from thieving and the second means that we don't seem to have any way of getting at them.

But I think there's more to be said. When the taxi is on fire, you smash the windows and get out. When there's no more water, the intense search and struggle starts. And when enough of you are outraged, something tips. And when everyone, yes everyone is angry enough to act, there will definitely be real results.

I'm for watching Zuma run as fast as he can to get away from us, with a look of utter dread on his ugly face, because we're all going for him, intent on teaching him how bad he is, since he's unwilling to admit to it. We will all be embarrassed in the history books because of what we didn't do. And of course, it's not only him, but he certainly is the hinge on the swinging door of corruption.

But we shouldn't be intent on killing Zuma and his cash-workers: our intention, if we are to work out a new story should be creative, communicative, careful and compassionate. And not goody two-shoes. Compassion includes dispassionate excision of what can't be remedied and will only destroy. The politicians are running out of water and wisdom. They are not creative people. Those who buy into divisive talk about decolonization need to work out the difference between rhetoric and real stories.

So where are those with the words that could point us in a fruitful and sustainable direction? I think they're all about, but they need to be encouraged to turn down the volume, reduce the rage to reason, and tell the stories of what makes them the South Africans we want to be.

I hear Kieno Kammies talk to quite a few in the morning. He's got the right idea: a bit of a rant against Jacob, and then some attention to the nation-builders.

The better stories are everywhere. National and narrative glue.

Posted by Prof Walter Harry Willies at 09:03 No comments:

Not a leader, not a follower: the new category: Communicator 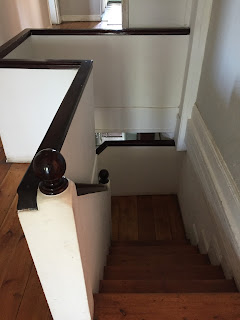 The leader is beholden to lead. You're either at the top of the stairway, or going down. But the world as we know it as at the end of meaningful leadership. They no longer impress. Political leaders are as ordinary as thugs. Business leaders are stress managers rather than economic shapers. Religious leaders are, at best, persuaders, at worst, liars. Military leaders are authorized bandits, educational leaders process managers. The new official lieutenant to the leader is the executive coach, and this shaman is an expensive one because if the so-called leader buys into this, the money and the energy blend into a fascinating prostothetic. We believe each other, because we paid for the feeling. The coach paid a lot, the executive paid a lot, therefore it's valuable.

There's an even better one:
"As I was going up the stair,
I met a man who wan't there.
He wasn't there again today,
oh, how I wish he'd go away".

The language of leadership assumes the position. Increasingly, the language fails. The money is still there, but the communication isn't.

Each step. Not the top, not the bottom, but the connection, the synapse, the transmitter, the avenue of accelerated efficacy of purpose related to the business at hand. The team, the whole, the movement, the meaning, and each part thereof.

The body itself is such an example. It all works, but often the leader is absent by default. The body cannot lead itself for itself: it is part of an ecology. We're going downstairs to open the door, maybe we're going upstairs to the toilet. But we, the decision itself, are going. We're communicating the purpose as one, nothing left out.

Few leaders dare to play, when there's much at stake. But living itself, is a stance, a stare, an attitude, a gamble, a game, a one-life stand.

There's much to be communicated, and few who know how. The Story Clinic is one avenue. Not one story exists until it's enacted by communicators.


Posted by Prof Walter Harry Willies at 08:58 No comments:

The Story Clinic and Cansa Support

On 27th September 2017 The Story Clinic attended a CANSA support group at Sederkem Clinic, Clanwilliam. The person who kindly arranged this was Susanna Mezza, of Sederkem.

The purpose was to offer emotional support to cancer survivors and carers. The medical world is often better at clinical work than compassion, and CANSA assists with both in many ways. The Story Clinic is grateful for this opportunity to be involved with a really worthwhile organization. The theme was "Six ways to support feelings attached to cancer". In the end we found that it wasn't about counting the ways, but realizing them through experience. 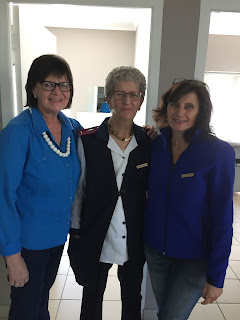 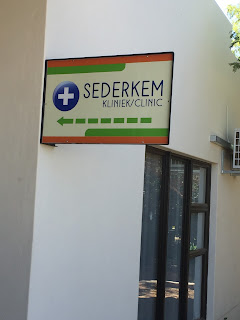 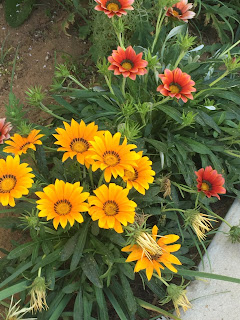 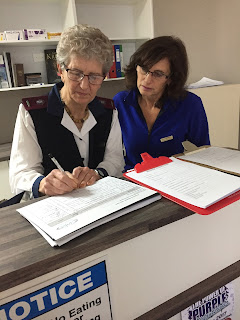 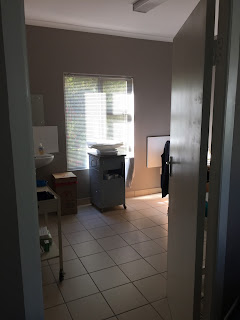 When one is diagnosed with anything serious, the emotional consequences are difficult. One helpful approach is to write headings for the chapters of one's life, and then to review how adaptation to a new "normal" has taken place. The respondents is this event taught me a lot: how they understood their own emotions, how they valued those close to them more than their own lives, how they took on new and deeper experiences.

Thanks to all for this enriching experience, and especially to Johan Vermeulen, owner of Sederkem for his unwavering support of natural means to health.
Posted by Prof Walter Harry Willies at 06:54 No comments: 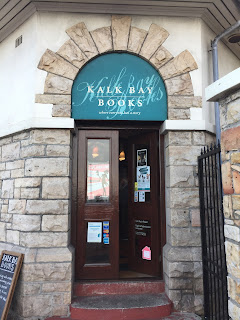 Kalk Bay Books kindly included The Story Clinic in their evening events. We intended to have an interactive experience with story therapy and poetry therapy, but didn't have time to move beyond story therapy. Story therapy is about viewing one's life as unfolding story, using typical aspects of story such as chapters, voice, authorship and description of detail to surprise oneself out of a constricting life plot. 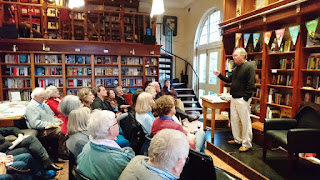 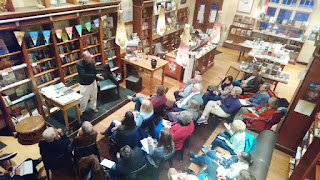 We went through a few exercises and the general experience was fruitful in terms of realization and discussion.
What a marvelous venue Kalk Bay Books is! The atmosphere is palpable. Thanks to Audrey, of Kalk Bay Books, and Mary-Ann, the events co-ordinator. Thanks to Michael Salzwedel for his journalism, and to Prof Paul Potter for his support. And to Leopards Leap for the sponsored wine to Kalk Bay Books. And to those who brought memories of old friendships with them. I was reminded of so very much.....perhaps this is how the glue of story works.
Posted by Prof Walter Harry Willies at 06:25 No comments:

On Wednesday 2nd August 2017, The Story Clinic held an interactive event at the Clanwilliam Kunshuis, on invitation by the owner, Stephanie Stone. Stephanie has a huge amount of art available, and the gallery is certainly worth a visit.

The topic was "Art and neurotransmission: how far does feeling go?" 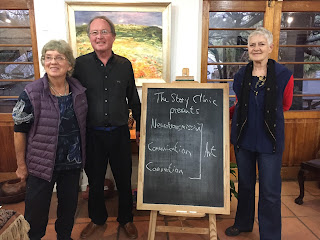 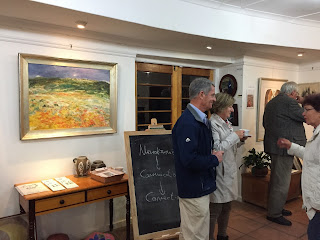 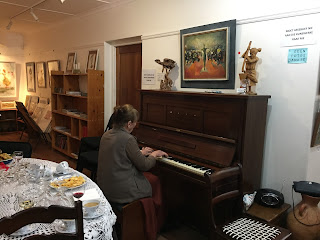 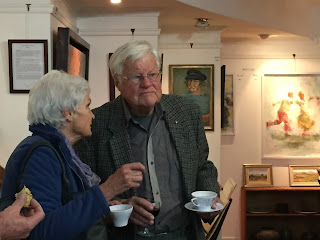 We started off with a brief explanation of how neurotransmission works, and then applied it to the visceral experience of art, how we feel when we encounter images, and how those feelings come to mean something to us, individually and collectively. We got the group to make a big circle, and showed them how to behave like neurotransmitters. Did everyone enjoy that? Some weren't so sure, but at least it was fun.

The main theme was that communication is central to the creation of meaning, and that art is not merely something outside of us, but a huge aspect of what is within us, and that we find and experience it by paying attention.

Many thanks to Stephanie Stone, and to all who participated.

Posted by Prof Walter Harry Willies at 06:07 No comments: