Biofocusing, educational coaching, NLP and what to do about folly.

Living on a continuum between wisdom and folly, what do you do? Let's define terms: wisdom is about using your mind i.e. your thinking, feeling and power of choice to best advanatge (what does best mean?) and folly is choosing not to do this. The power to cancel power.

Why would anyone cut off their own hands? Why would you set fire to your only sail when you're in the middle of a quiet ocean?

Lack of intellectual capacity means that one is disabled, not foolish. Foolish is when you make a bad decision because of rash feelings or inadequate thinking. You needn't have made that mistake. So, don't do it again, and you're not such a fool. You can be taught. You're a fool when you make the same kind of mistake again and again on purpose, and refuse to learn to change this pattern.

People do this all the time, though, being creatures of habit, preferring this habit to that, the more immediate outcome to the deferred outcome. It's far more comfortable to come home to warmth, supper, family and rest than to go out on a quest for your personal grail. In fact, far easier to allow warmth, supper, family and rest to be be the grail. There's nothing wrong with that, many folk don't have even these simple joys.

Yet even the most ordinary person has a calling to extend an allocated quota of excellence into the immediate environmnet. Don't ask me to define excellence. We read Plato's Meno for a whole year, and still, like true philosophers, couldn't reach consensus.

We tend to think of fools as extreme cases. Not me, I'm no fool. One moment, though: all your fruitless habits are evidence of folly. All your moments of misdirection add to the world's misery. My purpose here is not to moralise, but to awaken. I'm less interested in the mistakes that you're aware of making, and more concerned with the mistakes you keep on making quite unconsciously. Your patterns of permanent pointlessness. I earnestly recommend that everyone should go through a course of NLP. It's the most efficient and kind way I've found that alerts you not only to fruitless and destructive patterns of mind (include thinking, feeling and deciding) but also provides pretty rapid solutions.

There's not too much reality, as a given immutability in the material world. Even faces can change, and I'm not talking about cosmetic surgery. Bitterness can turn to peacefulness, and grief can turn to joy. I'm not talking about positive thinking. I like what Demartini says about positive thinking. It can't be done on any permanent basis. If you go through the exercise of what he calls the quantum collapse you'll come out with something fruitful, whatever the experience.

I came to the idea of biofocusing - one of the many stations - by pondering the term proprioception. Sansonese in The Body of Myth spends a chapter on this one, explaining awareness, consciousness and focused yet ultimately extended attention: awareness external, internal and beyond the body. We have unworkable concepts of living, since we are held in the limiting confines of the material universe, but that's only for a few decades for each of us. A concept is merely a matter of stabilised intellectual energy, an idea that you can pass on. Emotions, hideously labelled and presented as nouns, are far more fluid and brief than that, yet profoundly intense and exciting enough to change a life at any moment.

So the responsibility of choosing fruitful patterns of living lies with the individual, which is probably what humanity is for, in contrast to to zacunanity, that other species on a different planet, far, far away. They have a different lesson of cosmic proportions to learn. The individual had better get on with it, then, by learning sense, learning how to speak it, and learning how to speak it in such a way so as to be clearly heard. The good news is that this will work, the bad news is that you may be the only person to hear what you're saying. Nonetheless, do it. This is the antidote to folly, because at least you will have decided to make a commitment to wisdom. Frankly, I don't expect that you'll be the only one to reap the benefit of your own better patterns of purpose. Wisdom, movement and growth tend to work together. Perhaps there's not just one great tipping point, but many small incremental decisions adding to the sum. 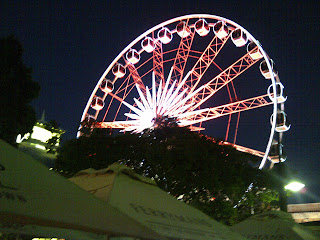