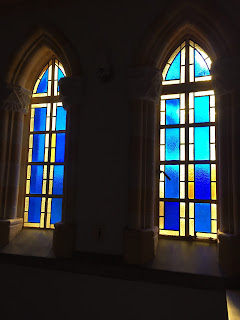 The numbers in and of South Africa aren't gong to crunch well. My actuarial instinct says sorry, but the prognosis is poor, and time is running out. And the country's thinking and feeling is not about getting the story right but about believing the unworkable stories that the politicians want you to accept. We're heading for a watershed election in May this year, where official opposition parties are likely to change lanes, after which the rhetoric will become even less sensible.

So the Story Clinic wants to make a statement here: change the complaint about colour to the call for calibre. Sure, there are so many valid points to make about slavery, colonisation, colour-bars, prejudice, and perverted social purpose, yet decisions are what create movement at the end of the day, and if you decide to get victimised and lost in a fruitless verbal vomit, you might get the dregs of your imagined emotions out, but that won't necessarily cure the sickness.

Colour-blame is not a fruitful basis for analysis. That way there's always an us and them, and you can tweak the numbers to make it now, for the imagined future, or for the whole of history. And colour is too obvious. You can plaster a label on a colour because you can see it. Turn the lens inwards. Test yourself. No matter your culture, colour or climate, that's the real call.

How does a democracy keep a Zuma president? How does an ANC try to silence its obvious secrets of abysmal corruption? And how does Cyril pretend not to know? And really, a DA banishment of all things that might smack of colonialism while classrooms are allowed to collapse with righteousness? All the while the unfair treatment of blacks and the unfair treatment of whites colours thinking and feeling overwhelmingly. An EFFing mess....

Calibre has to do with being fit for purpose, exactness of execution, proof of character and some evidence of stepping up to the plate when called. This seems doomed in South Africa, and I'm simply being actuarial, not pessimistic. Add news headlines, which admittedly are not exact stories, to the litter, crime, corruption, untold carelessness and casual attitudes that have replaced good sense, and you won't need the political or economic analyses that columnize our pretended characters.

Let the Story Clinic be clear: if South Africa is to move out of its red light zone which isn't sexy at all, but really and dramatically dangerous, it needs to stop thinking and feeling colour, especially the black and white rubbish, and to start getting calibre. Which means beginning with oneself, and doing what one can. And truthfully, not merely strategically. And a combo of these would be good, if we could possibly get it on the menu.

Maybe Cyril could meet me at Ocean Basket. He could lose his gloss, which will go, in any case, and I might get the three-way calamari, all white at bottom, but with different tastes. And the house wine, if I'm not mistaken is Two Oceans. Hey Cyril, let's beat EFFing Julius and sue them for not being One Planet! The attorneys would love......and all the parties could use green as another camouflage....

Posted by Prof Walter Harry Willies at 10:50 No comments: