C.S. Lewis wrote that love is intelligence in action. I would agree. I would also add that the intelligence instinct in humankind is far less developed than in the rest of our living planet. The soil and rocks behave better than we do.

Being probably the most aware and conscious species - some have suggested that dolphins may be more aware than humans - the instinct for intelligent behaviour  is surprisingly overtaken by ferocious, possessive, demanding and peverse instincts.

My guess is that this has happened because the intelligence instinct has been limited to teleological application. In other words, humans use intelligence to make whatever they can to improve quality of life. From heat to transport to shelter to communication to food, unimaginable levels of quality have been achieved.

Yet human intelligence has failed to find an answer to the most basic question of who mankind is in the ultimate scheme of things.

The are strong signals of intelligence in action: curiosity, compassion, contemplation, wisdom. Give a child a milieu in which these are practised, and humans may develop these traits exponentially.

The academic world does not guarrantee such signals of intelligence. I was never more disappointed than to realize that senior degrees are far more frequently evidence of egoism than cogent curiosity wisely applied.

I think the most critical window for loss of natural intelligence is the path from childhood to adolescence. The displacement of curiosity is a strange phenomenon. Is curiosity contracted, extracted, distracted through this window? Could it be attracted to that which it serves as matter oof course, as Steiner believed?

Reasonability is also a sign of the intelligence instinct. As an adolescent, I was always baffled when adults refused to reason when it came to testing belief, and trashed my soul in defence of their inability to cross emotional boundaries. Emotional intelligence is instinctive to the extent that growth is experienced as imperative.

Instinctive intelligence finds a royal highway in ecolgical intelligence. The first drawing of the sabre-toothed tiger meant that the observer was no longer running away, but enjoying the beginning of appreciation, which is the first building block for the intelligence instinct. That tiger is a beautiful animal, though you're its dinner. Losing the fear of becoming another's dinner and learning to appreciate may be difficult in the beginning, but so are most things.

In the oceanic chaos of emotions there's a cold current that reminds us of true north. That truth is a direction, not a destination, and when you follow it one thing leads to another. Truth is not predictable, as dogma would have it, but your being will always find a way, if you trust.

Intelligence is deeply natural, and the natural is continuous to the spiritual. Words have a terrible way of dividing understanding artificially when they are used by humans who are either naive or manipulative.

The extremely artificial nature of school education has resulted in expectations of varying intelligence and social classification. In NLP each individual is being as intelligent as possible at any moment. If you are more sensitive to the cold current, that's a gift and a blessing. Rarely will a school environment promote intelligence for its own sake. A good school will make an attempt at pride which is a steeping-stone towards but not a replication of intelligence.

Intelligence is core. It's what the emotions do when the joy of aliveness is chosen rather than the fear of diminishment and death.

At the core of human consciousness there's a strange, very versatile, ambitious, creative and affectionate animal. Elusive as the abominable snowman, sighted as rarely as an extra-terrestrial, almost forgotten by the humans as they know themselves, it has no enduring name by which to identify itself. Fiercely bound to the territories which gave this species it various births, racked by reminders of a greatness which seems ridiculously immodest, every now and then one of them steps forward to make a claim. Often, the deed itself produces significant movement. Sometimes an irrevocable path is created. Blessed with the gift of language, they have a very vague grasp of the genesis of the leap between language and greater meaning. Mesmerised by story, drama and what's going to happen next, they offer immature attemtps to enter into the presence that hovers and whispers.

Follow, follow, the will o' the whisp persuades: but they draw back, asking for sun, where's there's twliight, and a hesitation between worlds of knowing.

Would you dream, know, or create?

Stand for some time, where you are, and it will come, if you want the answer... 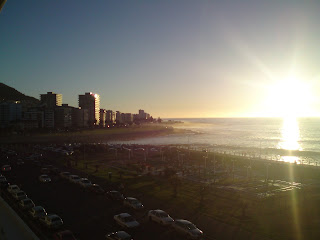