Where does my story start? 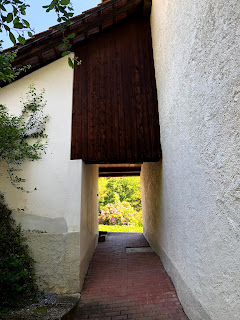 I grew up with the given idea that biology explains everything. You start at conception, you do whatever you can to live a healthy and well-lived life, if something goes wrong, the doctor will fix it, and eventually the body fails because of something organically malfunctioning, and then you die.

You have a beginning, a middle, and an ending, as stories are supposed to.

There's a lot to be said about this, but let's pay attention to the start, the beginning of your story.

By way of a preamble, your body and your being is more like a story than anything else.

If you're able to grasp that you're part of a cosmic process rather than an individual person, you're more than halfway to knowing that your story has no discernible beginning. To make it easier I could say "as well as an individual person" but this individuality is more of a hindrance than a help.

Sure, your body was conceived, gestated, born, grew up, and here you are.

It didn't do that in any individual way. Bodies look individual because they can move about on their own, but that's as far as it goes. Not even thinking is really individual.

The emotional imprints from mother to foetus, historical context to formation of attitude, and genetic predisposition to physiological conditions, and the way your neurons get set up, all add up to the mystery we call consciousness.

So you can decide where your story begins.

Mine is cosmic, but I would advise a smaller nest than that. It's better to know your mind than to get lost in it.

In Story Clinic we suggest that you begin spontaneously. Don't start formally with "I was born....etc, etc."

Attention is crucially important, probably the most valuable attribute of humanity, in focusing cosmic capability. So we would ask, what does your attention seek right now? Let's slow down out of the normal stuff of dailiness, and allow your body to speak and attend to what's being communicated or required to communicate now.

Or we could allow for some moments of imaginative reflection, and begin with a spontaneous memory. This is a fruitful kind of beginning. The neurons are good at doing it for themselves.

So your birthday is a milestone, not a definitive beginning, and the Akashic records are a library, not a book.

And the Alpha of the alphabet was an invention, not a discovery. So even the language that you use to decipher yourself is not a totally adequate tool, although helpful.

Your story starts where attention engages. Where it engages is up to two things, as I perceive it, what your imagination presents, and what you choose to do about it. For Tolkien, it involved a ring, for C.S. Lewis a lamp in a snowy world where animals spoke, and for Emily Bronte, a rattling at the window, and a haunting dream.

If you give your imagination that same gift of attention, a unique, strange, strong and valuable beginning is very likely to emerge.